Cancer is when abnormal cells divide in an uncontrolled way. Some cancers may eventually spread into other tissues. There are more than 200 different types of cancer. 1 in 2 people in the UK will get cancer in their lifetime. Thanks to research many people are cured. 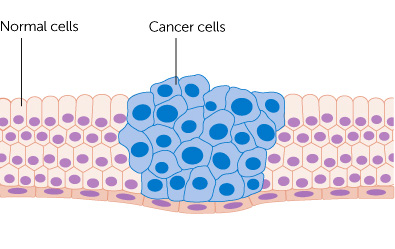 All cancers begin in cells. Our bodies are made up of more than a hundred million million (100,000,000,000,000) cells. Cancer starts with changes in one cell or a small group of cells. Usually we have just the right number of each type of cell. This is because cells produce signals to control how much and how often the cells divide. If any of these signals are faulty or missing, cells may start to grow and multiply too much and form a lump called a tumour. Where the cancer starts is called the primary tumour. Some types of cancer, called leukaemia, start from blood cells. They don't form solid tumours. Instead, the cancer cells build up in the blood and sometimes the bone marrow. For a cancer to start, certain changes take place within the genes of a cell or a group of cells.

Cancer grows as cells multiply over and over

Cancer starts when gene changes make one cell or a few cells begin to grow and multiply too much. This may cause a growth called a tumour.

Some cancer can spread to other parts of body

A primary tumour is the name for where a cancer starts. Cancer can sometimes spread to other parts of the body – this is called a secondary tumour or a metastasis. Cancer and its treatments can affect body systems, such as the blood circulation, lymphatic and immune systems, and the hormone system.